Step Onto Treasure Island With Quickspin 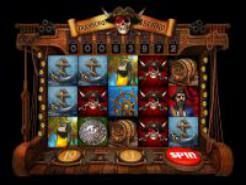 Play Now
Treasure Island… a place filled with treasure (we hope) and yet perhaps at risk of pirates too. When this Quickspin title loads, you will see you are on board a pirate ship. A crew member – strangely taking the form of a crocodile – appears to the left of the reels. On the right, there is a rather friendlier-looking woman who is wearing a pirate hat to top things off. What lies in store for us on board this ship?

Five reels are shown here, with all the icons appearing against a background of wooden planks. A maximum of 20 lines can be played.

The five-cent coin default can be reduced to one cent or maximized to $5 a time.

The pirate flag is the wild, showing up on reels one, three, and five. If you win something with its help, you’ll scoop double the usual amount. Only the treasure map, used in Treasure Island as a scatter symbol, won’t be replaced by that wild.

Does the game include special features and bonuses?

Find three or more treasure maps and you will either win 10 free games or entry into a bonus feature. The free games offer bigger multipliers and the chance to trigger a further set of free games. If you trigger a bonus game, you can choose from two options. Firstly, you could search for a treasure chest hidden on the island. Secondly, you could raid the cupboard to try and find some food! Whichever option you choose, prizes are available that are worth between 1x and 1,000x your triggering bet. If the parrot pops up to deliver a message during the bonus, you will get the chance to play another bonus feature. That parrot can also appear in the free spins, and if it does, a bonus prize will be awarded.

Download Treasure Island today and get ready to play

The reels don’t spin in this game. Instead, all the icons spin in their respective positions. It makes a nice change and you can still see whether you have managed to trigger any winning combinations. Treasure Island is hardly the newest slot on the block, but it does offer a nice chance to play an excellent pirate-themed game with a few neat twists. And we do love a good twist – something unusual we’ve never seen before. Don’t you?
Play Now